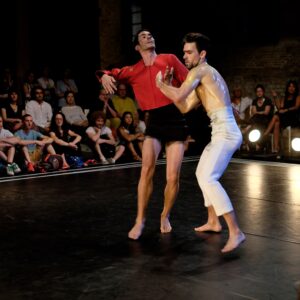 Last week I went to Biennale in Venice to see a show staged by Spanish choreographer Albert Quesada on stage with Zoltan Vakulya who signs the choreography as well. The title of the piece is “Onetwothreeonetwo” and is concerned to rhythm. It should be a piece that shows a unstructured and contemporary flamenco. I liked very much the piece: it’s really affordable  by everyone, even those who are not used to see contemporary dance  since the language  wich is built  with is quite clear: it’a dialogue between the two dancers, the music and the rhythm and even if it’s minimal, the music helps people to recognize the main elements of this ancient culture of music and dance. The mixture of traditional signs and nowadays aesthetics is  really well blended and the stylish aspect is  wonderfully expressed  with a good balance of richness and bareness. I could say  that  what we  saw at Arsenale is a kind of minimalistic baroque form of show that is fully immerse in contemporary but that doesn’t forget or betray at all the roots of cultural identity.

Albert Quesada was born in Spain in 1982 and attended P.A.R.T.S. school of contemporary dance in Bruxelles, the Hogeshool voor de Kunsten ( university of arts) in Amsterdam and studied also Phylosophy and multimedia engineering in Barcelona. He’s a member of Zoo-Thomas Hauert dance company and he also creates pieces and dances by himself.

I’ve seen that you have chosen very simple and basic costumes. How  important is the costume in the flamenco language  and performances, in general?

Albert Quesada: “I think it’s very important, very stylized and very recognizable and in our case we wanted something very simple, we didn’t want  to take the baroque style of the flamenco costume but we wanted  to get one of its essence of the style, of high pants and tight clothes and something you can put on and off” 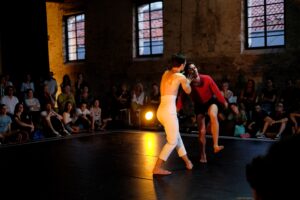 Something  easy to manage during the performance

A.Q.:“Yes and something primary also with the colours we take,  white black and red.”

Usually we think to flamenco as something really rich, full of signs like music, palmas, singing,  dancing. How much flamenco can be minimal, since you both dance without music?

Zoltan Vakulya: “I think flamenco  can be extremely minimal  because flamenco is just an interpretation of mood, feelings and you inner drive to movement it can be very very little.”

Since you’re not Spanish, how do you feel and live this strong culture of performing  arts?

Z.V.:  “Well I think  I feel connected  to it in some ways  because the music makes me move and there is already enough I think. There is a very  connection of being Hungarian and having some gipsies in the family  and I think I’m somehow connected to the feeling because the gipsy music and gipsy dances, in their roots,  are very similar. I’ve been doing a little bit of gipsy dancing, I’ve been going  into gipsy in Hungary some times ago. that could be the connection but for me it’s just listening to the music and feeling that it makes me  move.”

A.Q.:  “Because it’s what flamenco did to us: it came slowly next to us and at some point it took over and I think that’s  what happens a little bit with the dance, it becomes more and  more “flamencoish” and we wanted to represent that through something  that we don’t control; we put on as a costume and it comes  through us and we exchange this colors. It’s a way of sharing the part of our dance through a material that is alive.” 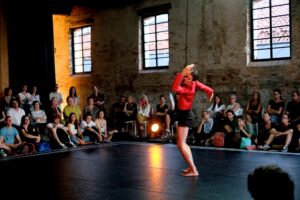 A.Q.: “Interesting reading. I think we approach it, at times, more like a storytelling of being aware of the movement to do and sharing them with an audience acknowledging  that we are doing these movement  you’re witnessing and it’s a very simple fact of sharing a moment. That’s indeed ritualistic sharing with somebody, I think we are very aware of that and looking out and acknowledging that we are all enjoying an evening with this amazing music.”

in the program You say that this is not a flamenco piece and you ask what is flamenco, if we think  to flamenco  we think to something different . The most famous work about flamenco  I’ve seen is  Fuenteovejuna  by Antonio Gades: it’s different from this and yet many of the things we see here, in this piece can be recognized as flamenco  or anyway as elements of Spanish culture and some gestures recall to corrida and the ancient relationship between the man and the animal. Why you say that this is not flamenco if everything we see can be recognized as an evolution of something traditional?

Z.V.: “I think it’s one reading from the many. For example a work of Emenuel Gat, a choreographer who is performing here in this festival, in his earlier work, wich is completely contemporary on Mozart and that had no connection with flamenco and any traditional music, I see a lot of the basis of flamenco and evolution of flamenco. You can interpretate in many ways. I think what you say it’s right because that’s how  see it  but it’s not our intention to bring that point of view.”

So what was your intention? if we recognize something  like flamenco  but it’s not flamenco so what it is?

Z.V..: “To me what I do here has no need  to look or feel anything like flamenco, this is if you put this music that how I move because that’s how  I’m on a play with the music and obviously because this music it’s going to drive  way in a similar way than the evolution of flamenco . the evolution will reveal this somehow  but we don’t try to approach it directly but we might go round it.”

A.Q.: “Absolutely and going back on what you said before, with the program saying that this is not a flamenco  piece, I was mainly about audience come in and expecting  a piece of flamenco with proper flamenco costumes and whole things. I wanted  indeed open at the idea of flamenco it can be and using only one of the elements of flamenco that is the music and to play with the other elements around a little bit. We wanted to invite the audience to experience  the flamenco music in a slight different  way  but indeed  this is  contagious, as the paint is contagious as the music is it can make me feel in a different  way and  be different and  with  the rhythm of flamenco that is possible.”

So also when there is no music and it’s all silent you play flamenco because it’s your language?

Are there some elements of other culture that can be integrated  as a part of Spanish culture and performing arts? Sometimes  it happens to see  irish dances melted with Spanish ones for example. Can you use flamenco with othere genres like hip hop for example?

I know you live in Bruxelles and Barcelona. In some italian magazine I read that many arabic people expecially in NorthAfrica and so on, like the arabian heritage in Spain is still part of their culture. what Spanish dancers, choreographer, people of culture, think about this new form of Islamic terrorism that has our western way of life as a main goal? Do you think that Spanish culture can be  more subjected  to a cultural attack? Vatican is another cultural goal of Islamic terrorism. Do you feel like a kind of danger more than in other places?

A.Q.: “I think we are all in danger, in Italy, Spain, Russia, everywhere. There is no place more dangerous  than the other today.”

Can you imagine a kind of future where there will be some restrictions? Maybe “tomorrow” we won’t be able to see a naked dancer or something else that will be considered offensive. Do u think  dance can change in some way because of these people that are coming have a different culture we have to think about? 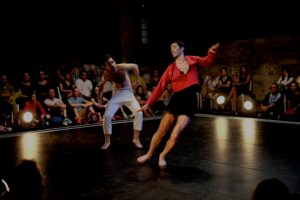 A.Q.:  “No I don’t think that dance should or will change in this way at least not in Europe or not in another country but I don’t  think politics should get involved in culture.”

Z.V.: “Expecially nothing change in violence because you talk about terrorism.”

Maybe also the people that are coming with a different culture, when they will be more than us…

Europeans with our culture. They have their religion and they want follow it: they could want to go to theater and not to see a naked dancer or a kiss.

Z.V.: “They don’t come to theater and what we experience, I think in Brussels, like a personal  experience,  who is coming to theatre has different  chosen. I see there is a selection of religion in audience, the ones who don’t want to see the show because they don’t like it they don’t come to see the show, it think it’s that  it’s very difficult and what you said “when they will be more than us”: when they will be more than us?

In Italy we talk a lot about this: many governments say that we are too old and we don’t have people  that work. They do more children than us and we need them to come to us.

Z.V.: “There is a very important integration that it happened  obviously but I would be afraid of people  talking like you now and in the future because this is not helping  anything. if that’s your point of view: “in a couple of years they will be more” , can you tell me how many people came in the last year From Africa and Turkey? A million. Do you know how many people are living in Germany? 80. This for me is a very sensitive answer, it’s just a very important and interesting  question what you ask but if you go to Qatar or Saudi Arabia  you would put the thing on your head because you’re a  guest: we should also approach people  here this  way. We have our way of living and we need to established that together but those people running in Siria: there are 3 points trying to shoot people and now the European Union is paying Turkey to shoot them on their home, so where do u go? This people have 4 guns on them with the kids.”

Trailer of  the  show