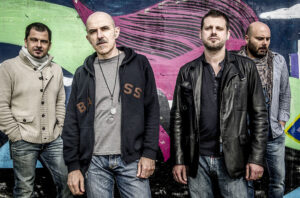 ENGLISH VERSION OF THIS ARTICLE IS BELOW THE VIDEOS

Rosario, this is a band you created  and you perform here in Vicenza Jazz presenting the project “The Golden Circle” dedicated to the saxophonist Ornette Coleman. What is it about exactly?

Rosario Giuliani: “The name comes from a very important album that Ornette Coleman made, released by Blue Note label and recorded it in Stockholm, in this historical place that is called The Golden Circle. He recorded it after a long absence: made ​​a series of record productions until ’57 -’59 and then took a long break, he devoted himself to write music for films that never were even used and then returned to the audience in this venue and the album is called “Live at the Golden Circle.” Let’s say that with this band we have resumed the previous Ornette Coleman, from the ’57 -’58; the tracks we recorded in this record are part of that repertoire, albums like “Tomorrow is the question!”and others that come at the end of the 50’s. We liked one thing in particular about his return, when he returned to the scene to play for the audience, he said that this music that he had written was “the new thing”, something new. Some expect that music when they come and listen to us, this is our interpretation of Ornette Coleman’smusic, because we are not free jazz musicians: we took the Ornette’s music, that excites us, but we reinterpreted in our own way, so we like “The Golden Circle”, because it’s our “new thing”. ”

Fabrizio Bosso: “The Golden Circle” for me it was definitely something very exciting and I am very happy to have faced this kind of repertoire, very difficult and challenging: the harmonic grid is bare, almost always you play on only one chord, so it is vital that you create the interplay with the musicians, if that thing doesn’t happen, the music remains flat. Unlike when you play hard bop or bebop or another type of jazz, with the harmonic progressions where maybe you have some handhold in addition, in this case you really have to be reactive, taking from everyone and being able to start from an idea and develop it with the other musicians: alone you don’t do anything, you cannot play individually. “

Free Jazz music developed in the 50’s and 60’s in America in the context of social rights battles. And yet it has come outside the social environment that characterized it as protest music and became a genre for academics  and connoisseurs, surely less popular than it was at the beginning. How did this socio-cultural escalation happen?

RG: “I think it was useful say that jazz music was a niche music, actually it has never been: think about the success of swing music with people dancing or gospel and spirituals. There were some great moments of difficulty, some musicians have been easier than others to become famous, the history of jazz even teaches us that some musicians have become important and famous after they died and didn’t even enjoyed their success. Currently it has become a fairly even consumer music: jazz today is influencing all kinds of existing music. Often there is the problem that people are going to “see” a concert, not to ”listen” to it and fail to take a journey through the music, they listen to the first song, and once they saw the musicians and maybe have them photographed with mobile phones, getting distracted, you’re done. There is a very impressive picture of a Jarrett concert: as soon as he came out on stage, someone took a photo from behind and there were all the people with the I-pad and mobile phones. That takes you a little somewhere else.”

FB: “It is a problem of education because the pop we see a mass of kids running after a singer because they heard just one song and could buy an album and go to concerts for that song, they couldn’t care less about all the rest. This cannot happen in jazz. When these phenomena come out, however, the idea of the wanted hit-single that if is aired by RTL Radio Deejay then you have your turning point. ”

RG: “One of the things that satisfied us most is that many people don’t know Ornette’s music  because they are afraid of free jazz and after having listened to our project they have said that they’re going to read up on Ornette Coleman’s music because it’s beautiful. For us the greatest satisfaction is just bringing on stage and on album Ornette Coleman’s music in our way and when we tour  we are positively surprised because we can’t believe how it’s possible that the audience has such a reaction on a music like that. ”

In jazz, even folk influences of the various countries are very strong, I think about the music of the East. In Italy, in the South, perhaps in Sicily or Naples jazz becomes a bit ‘more blues. What are the musical elements and also historical and social factors that allow a certain kind of jazz to take root over another?

trend for which one goes to live in Sicily because there they play more blues. This is what you can see, as you said, in the Eastern European countries, where they play a certain kind of jazz, really influenced by their popular music. To me, it doesn’t seem that our jazz may be  much influenced by traditional music of the regions but from our music in general. Our tradition is marching bands and opera, there are cases like Pino Minafra who have done many things with bands proposing a kind of jazz mostly influenced by those atmospheres. ”

RG: “This thing is seen in a wrong way because is defined jazz what it is not. Jazz has a kind of language and form, and is branched: in fact we can speak of cool jazz, free jazz, hard bop or bebop, they are styles of jazz but jazz is one and it has that sound, so all those who play jazz should be in that “zone” there. Then surely in our music there may be a different approach than a German or a Swede, maybe their is a bit more distant and our is somehow more involved because we come from a more  melodic tradition and we live in a country where there is the sun: it is normal that in a country where it is always dark and cold they have just a different approach to life and thus to their art forms. According to me that’s bit mixed up: it’s not true that in Milan there’s a kind of jazz  and in Sicily another. ”

We said that the jazz has begun as music of protest, at least in the beginning. Then in the historical period has been replaced by rock and now a genre that is very on fashion is hip hop. These genres tend to represent distinct social classes: jazz black music, rock music is more of a white and hip hop is back to be  black music. If we take the hip hop and jazz, which are children of the same black culture, they have become really distant genres from each other to the point that hip hop is the new folk and jazz music is elite. How did this process happened?

RG: “I do not think that jazz is a music of blacks: in the entire history of jazz there have always been blacks and whites, they simply did different styles. If we say that arises from the spiritual and the gospel but then it became jazz … And hip hop is nothing but jazz with a funky rhythm that comes after. That’s why I say that jazz has influenced all genres of music, then we can say instead that jazz was very influenced by classical music … “.

FB: “Improvisation started from there, think of the Bach fugues.”

RG: “But hip-hop is absolutely jazz, if you think the music of Coltrane, Miles Davis, or the same be bop played by Charlie Parker, you put a funky beat and it becomes hip hop: since they wear your low trousers and put  over rap they think they have invented something but it’s not like that. ”

When “average public” thinks of jazz and classical music, thinks of Gershwin. The mainly idea we have about jazz performance is with small jazz ensemble of musicians. Does it exists a kind of symphonic jack, aside Gershwin who is the most renowned?

FB: “There are both contemporary and old things, Ellington’s sacred concerts are for symphonic orchestra and big band: 100 elements because 60-70 symphony orchestra and more than 20 big band. On the contemporary point of view, Wynton Marsalis has also written a symphony. People know less because they are more difficult to tour around, but there are cases of more enlarged orchestras. ”

RG: “they aren’t aired on TV: we set up to watch a Wynton Marsalis live streaming concert from Lincoln Center with a big band and a choir of more than 100 people. The problem is always the same: things happen but you should bring them to the people, that’s why people don’t know them, if we continue to air the Big Brother  then you can’t do anything. Sonny Rollins said something that I really liked: ” You cannot kill jazz because jazz is not a body, it’s a spirit.”