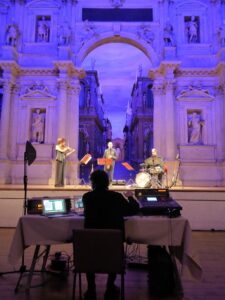 Last week  for the XXIII edition of classical music  festival ” Settimane Musicali al Teatro Olimpico” the concert  “Music from the air …Music  from the earth …” has been staged with Sonig Tchakerian at the violin, jazz saxophonist Peter Tonolo, multi-instrumentalist Giancarlo Bianchetti at the guitar and percussion and Prof. Alvise Vidolin at live electronics. The songs played were part of the repertoire of Tonolo and Bianchetti, the latter former collaborator of Vinicio Capossela and Patrizia Laquidara. The show was projected in order to focus on the experience of the perception of space: through the use of computers and the position of the speakers in the theater, there has been a rebound effect of the sounds that the audience has experienced in a clear and captivating way. I met Dr Alvise Vidolin Ph.D, for an interview I made for the magazine www.ladomenicadivicenza.it . Vidolin is sound director, professor at the CSC ( Centro di Sonologia Computazionale) at the Department of Information Engineering of the Is it a site-specific performance, designed for this theater?

Alvise Vidolin: “Yes, it is. I have to say that the acoustics of the theater led us to design just a particular spatial dimension. We did a little artificially because in addition to the surveys we have never been able to experience it here, but fortunately since the first rehearsal, in some way, our theories have been established and successfully tested. ”

How do the materials into the environment affect the diffusion and and the perception of sound?

“Well, a theater where the wood is dominant has a much more and embracing acoustics, and then the sounds that move in space have a naturalness that in other environments certainly have not.”

“let’s say that just because of our nature and the evolution of mankind, the awareness of the space was a overcoming factor just for surviving: nowadays, we basicly live in a very protected environment and also tragically noisy, we lost this ability to hear the distant, piano and pianissimo and the various directionalities. Once, recognizing a hazard in the distance, which was expressed with a certain type of sound, it was essential for surviving; so it is important, through art, to be able to maintain our ability about these principles that have allowed us to get to nowadays and evolve the way we evolved today. ”

It is that what you talk about when referring to psychoacoustics?

“The psychoacoustics it is the science that studies the phenomena of perception and one of these is how we perceive the directionality of the sources, as we place the sources in space.”

About directionality, you talk about variation of the position of the sound through a spatial path that takes advantage of different speeds and accelerations. Then you describe the sound as if it were an object that can be physically moved, and indeed, in the audience,  we “ran after” these sounds just as if they were objects that bounced.

“Exactly. In our perception there are some innate mechanisms that make us understand if the sound comes from the right, left, top or bottom.  Placing the speakers in certain directions and using programs that calculate these trajectories, it’s possible to simulate these paths . “ The sound wave against a wall echo-effect of bounce: we know that the sound is a “mechanical wave”, so it has an physical influence on objects, but it is not tangible, and the air is the real carrier, the conveyance of sound. We know that there is no sound in the outer space because there is no air. Is it possible that all depends from air?

“Oh yes, that’s right: they are movements of air particles that compress and expand, carrying, indeed. It’s a bit like the waves of the sea: we see them; the others, the air ones, we listen to them . ”

Talking about the echo: you said that, thanks to the electronics, it is possible to deform the sound, transforming it into one of the archetypal forms of music: the canon. Then he talks about the complex polyphonic structures, which begin from a generating melodic line. Are you basically talking about the loop machine?

“Let’s say that the repeated echo that you can hear inthe mountains is the basic element: when there are two opposite walls, the echo is repeated many times, it depends on the reflection of these walls. The canon follows the same principle, of course, with more broaded times and with other material. It is obviously a complete musical phase, the structure at the bottom of the music form. The music forms, including classical, however, arise from elementary physical principles that intelligence and musicality have developed at a later stage. We could say that the fugue is perhaps the form that had more importance. ”

The relationship between technology and music with acoustic instruments: if the technology used to recreate the archetypal forms, one would think that the equipment account for a relative on the technique of writing and instead all part of the form and structure of music that you create in the mind of

“Well, certainly yes, if we think that Beethoven wrote music even when deaf: in some way the power of thought  generates the music; later, the response to listening is also a great vehicle, but in Western thinking, perhaps, the dominant element was just the structure of thought. ”

Given that any sound can be modified, we may wonder what is the actual sound of the instruments: a question that the audience often does is whether what you hear is an actual instrument, a real orchestra or computer. It also happens in the visual arts. Isn’t there a risk that people perceive the digital sound as more “pure”, more authentic? I’m talking about media, what we hear on the discs and so on.

“I think it’s a bit a false problem, ie a problem of the moment: after all, music has always tried to impress. Even with the piano, let out “watery ” sounds has been a challenge that even gave excellent results. People have always tried to use the music imitate nature and the nature of things or invent structures, so it is normal that even today, with the computer, people go in these directions and that they get  closer to the sounds of traditional instruments and also that they lead traditional instruments to other sounds, because these are the games of music, in some way. ”

Today there’s a lot of people who make music without knowing how to play an instrument, and even among those who play, there are people who cannot read music. And yet many of them are good and master with ease and self-confidence technological tool, apps and so on. Can they be defined as musicians them too, people with a great cretivity but that don’t know the traditional tools?

“Well I would say yes. Then, there is always the academic world that needs justification and validation, however, until not too long ago, being a good musician, a good performer, was  enough to be admitted to the conservatory, regardless of the course of study that one had done. While in  some way, at university  people had to have a series of graduations and resumes, in the world of music people were chosen for their real capacities. So,  if these new generations have a truly innovative behavior in terms of music, they don’t necessarily  need have to have done the secular path, although I think it’s difficult to invent new things without taking account of the past. ”

What’s craftsmanship impact on the creativity of the musician who plays that instrument, compared to technological literacy?

“We have to distinguish children who become good at using applications invented by others and that remain closed in the reference environment wich they were created  for ( something like going to the supermarket and buying  pre-cooked food) to those who succeed to built  program and somehow come up with the app, then I can see this much more related to the idea of ​​musical development that music history has taught us. Those who use the products made by the industry, to me, they inevitably do what the industry has given them, they are not inventing new ideas. ”