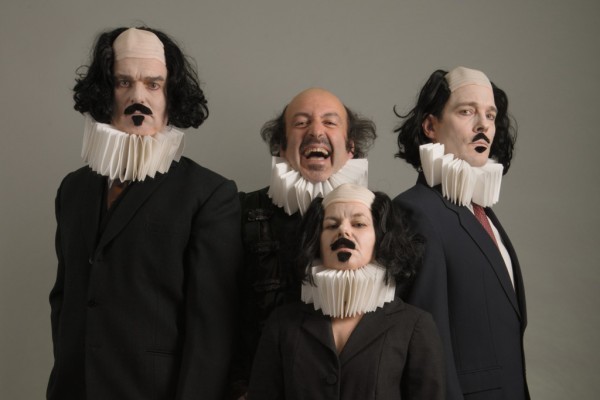 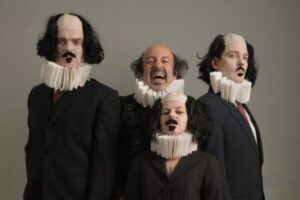 Spymonkey is a theatre company based in Brighton Uk and they are a comedy act. They’re an international company, since 2 of them are british (Toby Park and Petra Massey) the spanish Aitor Basauri and the german Stephan Kreiss. They came in Vicenza for an exclusive premiere at Basilica Palladiana of their show “The complete Deaths” where they stage a parodistic list of all the 75 deaths described by William Shakespeare in his  works. The show was performed in English with Italian subtitles and it’s realized by Spymonkey and Tim Crouch, who have directed it. Tim Crouch also performed at Basilica Palladiana after 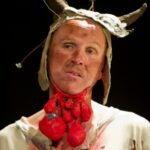 them with his monologue “ IMalvolio” where he plays the part of the character from “The 12th night” depicting the cruelty of the Shekespearian comedies. I really like the show because it runs fast and it’s built with a contemporary visual language. It makes laughs everyone  but  if youre knowledge in all the sheakspearian tragedies and in the whole pop contemporary and modern culture you can laugh much more.

After the show I met Toby Park for the interview you can read below where he has explained me their point of view about  the show and staging death nowadays.

here  you can find all the Spymonkey informations and tour dates

at the end of the interview the full list of the next conferences and shows  ( such as Macbeth with Patricia Zanco and Vitaliano Trevisan, a special project of Aleksandr Sokurov  with Anagoor for Teatro Olimpico, Teatro del Lemming and Moni Ovadia with Studio Azzurro ) scheduled  for  the drama and performing arts festival  in Vicenza “Conversazioni- il teatro e le arti- LXIX Ciclo di Spettacoli Classici al Teatro Olimpico e alla Basilica Palladiana” and all the contacts.

The first thing that can shock the public is the “stage 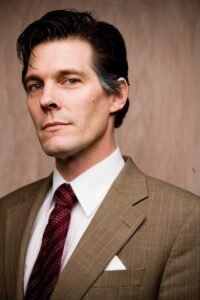 languguage” you use: the first of the most famous drama we see is Richard III where you do this great remix , like it was a dj set of images

Toby Park: “It’s a sort of post apocalyptic punk. There’s a Spanish company, La Fura dels Baus, for me and Itor, particularly, even we’re way now 20s, they were absolutely heroes, so when we started making the shows, we had lots of ideas for different sorts of experiments, avant guard theatre and thigs we really love and things we don’t love or we really hate, so that was us thinking how Fura dels Baus do Richard 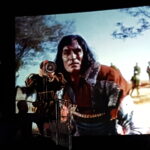 There is also, in the show, something like Trainspotting. 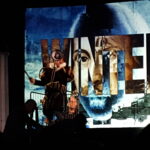 all tragedies, it’s a list of deaths but it’s funny. You also touch symbols like the orange suits, they are covered and this is very current: you take it one “the large side” because you say that we take a silent moment to think about the political changement in the Middle East . is it a osft way to touch a kind of death that the audience could be particularly sensitive to?

“ In a way our work is about art and how the artist can think the pomposity of the arts and the idea you can change anything throughout art. It’s a kind of self obsessed, certainly we find a funny idea or an idea that makes us laugh; so, for me, I really like to playing an artist who takes it very very seriously and try to realize an artistic vision wich is somehow unachievable for us. As clowns is always good to have an ambition wich is bigger than what we can achieve ‘cause it sets the bar really high on your ambitions, you overreach yourself and then you fail fantasticly. The most important thing is to do your best. The thing of the orange  jumpsuit touches something dangerous in terms of what of how the audience read it: there are allusions to Guntanamo and Abu Ghraib but that comes about thinking of what is the most pretentious way of presenting the death of Anthony settled in some unknown orange suit and place wich has an association but I think that is a part of our trying to make something ridiculous.”

In Italy we had a debate about the last earthquake because the magazine Charlie Hebdo,that has been injuried by the terrorists, did some comics about the deads of the quake and they depicted the victims  like different kind of pasta and people got really offended  by  this. Many intellectuals  said that our country is run by people that treat us like pasta and that don’t consider us and after the debate Charlie Hebdo 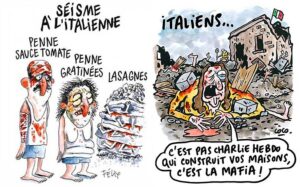 made another comic to justify where saying that our houses are built by mafia. On twitter many people said  “we are nomore Charlie Hebdo, we are lasagna”. Do you think that in this period in Europe  we are all so sensitive that this can change also the way of treating the death on stage and in arts?

“Yes, I think that we’re living in a time of people sensitivities get more extreme. We’re living in an age of extreme and the response of things get supercharged and I think also there is a sense  that people are looking a way of being outrages and the whole social media twitter and Facebook it’s like very quickly spirals upward. For us we enjoy being dangerous, boundering of good taste because when you’re on the edge it becomes a dangerous thing: death is the most serious thing you can possible experience I think, loosing someone you love, but I think what this show is about is the impossibility of showing death on stage, that’s the impossibility of any artistic endeavour, what you can do is only a pale shadow of what the world is but I think that the work is about the frailty of the human condition: in a way it’s our tragedy that we try to create, something that is as beautiful as the world. As an artist you always do to fail it but trying to do that is noble and ennobeling and I think the same with trying to portray the death in a honest way. We’re not trying to upset people but we have set ourselves in an impossible target to present all these deaths and, in a way, it’s something heroic to try all 75 deaths in one performance but it’s also a ridiculous thing.”

Is it the first time for you in Italy?

So what did you expect?

“We came for a visit in July with the technicalmanager so we have seen the space and we were surprised: I think the acoustic in here is very challenging because it’s such a big space but it’s also so 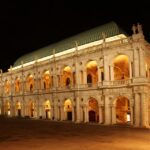 beautiful. I wrote the music in the show and it has been a fantastic thing to hear some of that music in this space, is beautiful and brilliant”

The all four of you can do everything: contemporary dance in a kind of the most important styles like, I don’t know, Pina Bausch, you can play instruments, you can write music. You use the word “Kunst”…

Yes, it sounds like something really intellectual because it recalls something not only about stage but also figurative arts like painting, or contemporary art or architecture. Your style, in comedy, recalls also what Wagner said Gesamtkunstwerk.

Do you work in that way?

“Yeah definitely, definitely. Also dilettante: I love being a dilettante, I love to learn how to make and edit films, make music, produce new things, design, doing website because nowadays we have the tools to do everything and just the lack of time to learn them properly but I do believe in not being able to do things particularly well. David Bowie talks about the various things you can do and one of the amaze is giving bad instruments to experts so get an orchestra playing kazoo radically changes the command of what you have to do.”

I saw that during the part of Macbeth everything is minimal and lightly funny: you create an atmosphere that we can expect like Scottish  music and 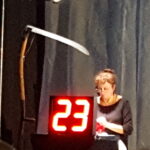 there is a kind of respect: at least by the side where I was seated I saw that the Death didn’t crochet anymore.

“We asked, in fact, a choreographer from Wuppertal Tanztheater of Pina Bausch.”

Ah, so I detected the right style!

“You did! We worked with Theo Clinkard in Brighton and so he introduced us to some of it: it’s Pina Bausch but there is Martha Graham in there so introduced some cliché of modern dance moves and we had cone fun with that in the way we create the number. They have each a different character. We were opening the festival in Brighton, the director was Laurie Anderson and we wanted  to have some kind of allusion of Laurie Anderson.”

Petra always says “I want to be Ophelia”: at th 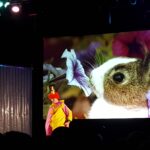 e end she has a banner with the name of Ophelia and the shadow play. At the end she actually plays Ophelia in the bubble because she is drown. All the world of Ophelia is created by cute animals and the bubbles, I read it like that. A kind of climax of Ophelia during all the work and at the end we see her dieing in a wonderful way like she was a kind of an angel. 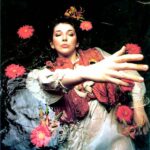 Yeah! Do you think that saying a famous name on stage or just seeing her name written is enough to create a climax that can explode wonderfully on stage than is just enough only the name?

“Well, the name is an association that people have with it, normally we have smoke in that scene and Stephan and Aitor do a very  lovely smokes and Stephan comes with that and blows big smokescreens to the audience. So there is bit more to that number, it was a bit naked here. That part of the bubbles and Ophelia is all about the other three, being allowed to do 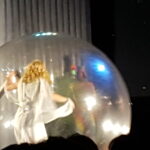 all the things Aitor made them come to do because they throw me out and they somehow go together because they start doing bubbles then Petra arrives in a giant bubble.”

They create a kind of prelude to Ophelia. Do You think Tim Crouch has seen Ophelia like a kind of ethereal creature like ,indeed Kate Bush at the time?

“Yeah I Think so” 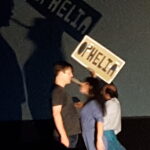 So, is it enough a name just to recall a great character? Is it enough to say “to be or not to be” or say “Ophelia” to  create the atmosphere to the people?

“No I don’t think it’s enough just to say the word. You have to take people imagination somewhere and this is the exciting , is what you can transform.”

Contacts for the festival

Next shows and conferences

What’s Oedipus to him?