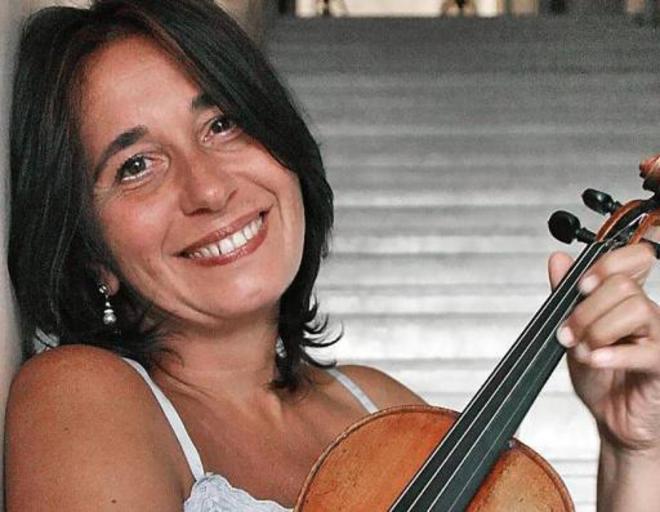 The following  interview is about a show  staged in Teatro Olimpico during the “Settimane Musicali al Teatro Olimpico” classical music festival.  The concert dedicated to Richard Strauss and Mozart featured onstage violinist Sonig Tchakerian and pianist Andrea Lucchesini. The program has been modified since it involved the participation of the cellist Mario Brunello, who was absent due to health reasons.

The program consists of authors who have chronologically followed one another: Mozart, Schubert and Strauss. During the XVIII century, musicians from very different geographical areas are influenced by each other, it seems to me that this happens a little less during 1700 and 1800: there are actually times when we can distinguish a composition as typically German or French?

Sonig Tchakerian: “Yes, there are scriptures that are typically german or french, that we can recognize  from ’700 onwards. Then of course the taste has evolved, grown and changed, contacts have increased and therefore the “contamination “have become increasingly necessary for composers and everyone. In every age, since the music expresses its land, that you feel that a Russian is a Russian, a German feel that it is a German, an Italian is an Italian, there is nothing to do. You just live in the world we’re living, which inevitably gets inside you. Depending on the language, you think in a different way because the language structures your brain and also in the composition, depending on the type of environment in which the living, the taste, the aesthetics: a Venetian is not one of Berlin or Paris. Once they were even more different. ”

ST: “I hope we don’t, because the identity is a very important thing. You lose, for example, the artistic identity: once the musicians and artists who played were much more independent of each other because they listen a little to each other, however nowadays it is clear that the taste somehow gets a little more homogeneous, is more easily contaminated so the differences are even less distinguishable unless someone is really the greatest. ”

Why there are countries in which the “cultured” music has a greater attraction on a cross public of all ages?

ST:  For better or for worse, Italy has been affected a lot by the influence of the opera in 1800: In Italy the farmer who worked the land sang the opera arias too, the same spread that instrumental music had in Germany,  wich In Italy remained inevitably a little aside. ”

Andrea Lucchesini: ” When Germany and Central and Eastern Europe countries have made ​​music at home, it was chamber music for solo piano, symphonic music was also listened to, here we had 20-30 years where opera had the main role and has completely deleted the other type of music. ”

In the late 800’s and early 900’s there was a movement that tried to dismantle the tradition of opera, trying to try to restore an italian “instrumentalism” that looked back even to 1700.

AL: “Exactly, but they didn’t make it, most likely because the impact of opera was so rooted in the families; my grandparents knew by heart all the works, words and music, and have grown up with a really strong culture that was however reserved exclusively to the world of opera, they even didn’t know how a symphony by Beethoven goes. It is also a message much easier to get across. Countries such as Germany, Austria and France have certainly taken a lot from Italian opera, the Italian lyricism was always a point of reference, they have taken and exploited within the symphonic and chamber music, and above all it was something you could play at home. That’s what nowadays television makes, they did it with all the instruments because everyone played, they had a piano at home and spent the evenings making music; is a tradition that over here never existed. ”

You talk indeed about a popular spreading: once in households there  were

Beethoven, Bach and now there are no more. What led to this depletion of interest?

AL: “Since after Stravinsky, music has moved away from the public and has created a system where the more difficult it was, the more effective it was. This has alienated the public because they go listening to a piece of contemporary music, cannot find reference points and then walk away. It is also a reason why phenomena such as Allevi and Einaudi are popular and have been successful. ”

Talking about Strauss: he was German (no link with the Austrian Strauss), also wrote film music in the 20’s and thanks to Kubrick’s film “2001: A Space Odyssey”, one of his symphonic poems, “Thus Spoke Zarathustra” , has become famous. He was, among other things, one of the first musicians entrepreneurs, attentive to the protection of musical product and musicians. There was a real sense of the musician and artists in general as a professionals, as it is for engineers or doctors. What allowed people to change their minds?

ST: “Nowadays we have all become the entrepreneurs by necessity. At a previous  time, unless he was  court musician who had his supporter, the musicians lived like that, then depends wether you were a great soloist, then if you lived in 700 and 800. The musician who also identify himself in daily life is a more recent thing that happened more and more, is one of many features you need nowadays to go forward. ”

Strauss lived during the period of Nazism. The regimes have usually given a lot of importance to the arts as music and cinema, both to promote them and to censor. Today politics is not very interested in culture not to support or to censure, it’s more likely that is a religion commission to express an opinion or a guideline. Why arts have no more the strength to “disturb” the power?

AL: “For those who govern us Arts are much less important because they don’t know them in most cases, it is much more interesting for them an opinion movement that is built around sports for example, yes, but according to me they unfortunately even cannot follow arts and therefore they aren’t able to tell whether an art is in favor of or against the way they work. Surely if a work goes against the religious principles is easier; at the time of the Nazis that was easy for them  to  say: it was degenerated music and it was  banned, not only the music of the Jews, but also all that music that gave way to the emotions, which was a chromatic music, serious musicians who had identified a certain type of composition as something that wasn’t in agreement with the principles, in this case, of Nazism. Now  what we hear on television is  all well, it has all and more, we are not surprised about anything anymore. ”

However, talking about music and emotion: more and more often it is said that music has to give emotion and it’s also said about cinema and dance. Doesn’t this “kill” the critical sense of the people? Someone can also be moved  by very primitive things.

AL.: “Absolutely, I agree. The proof of the success of Allevi is very big: without beeing against him, he is right to do what he does, people are going to listen to him then that’s fine but from a musical point of view, composition, piano, his message is very simple and therefore maybe it’s also the reason why people love it, because it is so simple that everyone can understand and have fun. It seems very strange that those who go to listen to that kind of music have no fun when they go to listen to Chopin, that is much more effective writing and has the same emotional impact: short pieces often, those by Chopin; Classical music often has this lack, which requires the listener  to have great attention for a long time but Chopin is a master of the short forms. There’s the hype behind: they see on television, the disclosure of the name is very massive and at that point whatever he does is fine and should be a success. It’s like new year’s eve, when we necessarily  must have fun.”

Knowing a track very well leads to deeply appreciate it. There are, however, some musics that capture the audience from the preliminary listening, regardless of whether they are classical, rock, folk, jazz or whatever. Is the appreciation given by the study different from that given by the immediate ability of penetration of a song?

AL: There are different types of satisfaction, a song that immediately wins you has such features that most likely hit you right away, others even at first glance they mean nothing and then, by persisiting in study and analyzing  we can understand much more meanings and hope to get the message across to the listener as well, this is crucial in modern and contemporary music . “